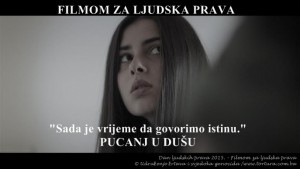 Now is the time to tell the truth

On the occasion of the International Human Rights Day on December 10, the Association of Victims and Witnesses of Genocide and The Action’s of Mothers of Srebrenica and Zepa Enclave have launched the campaign “Cinema for Human Rights.“ It aims to raise public awareness about the consequences and difficulties faced by victims, witnesses and survivors of sexual abuse and rape committed during the 1992-1995 war in Bosnia and Herzegovina.

“We were raped, abused and humiliated through them. BiH, freedom and humanity was raped. If you have such a woman in your family or neighborhood devote special attention to her. Tell her that her sacrifice was not in vain and that she is a courageous survivor while the perpetrator who did that to her is an eternal cowardly loser.”

“In BiH, a minimum of 61 children were born as a result of rape that occured during the war. The majority of these children are unaware of the truth about their origins.”

Institute for Research of Genocide, Canada joins the campaign and invites all friends of truth and justice to support this significant campaign.