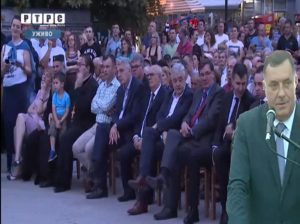 The president of the entity of Republic of Serbia, Milorad Dodik, must finally be sanctioned for years of anti-Bosnian, anti-European and anti-civilization, with that an anti-Canadian campaign. On behalf of the International Expert Team of the Genocide Research Institute Canada, we are asking Canada to react, sanction and stop the main generator of destruction, as well as its allies from the Republic of Serbia and the entity of Republic of Serbia on the continuous generation of insecurity and anti-state activities in blocking Bosnian, European and NATO integration.

Such behavior is contrary to the fundamental and universal values of human dignity and deserves any condemnation. It is essentially unacceptable and constitutes an insult to any victim or survivor. Such behavior brings discomfort to the public life of Bosnia and Herzegovina, surrounding regions and Europe. Such behavior also entails a riot among Canadian Bosniaks, most of whom are victims of genocide.

At a public gathering in Bratunac on July 7, he told the Bosniak returnees in Podrinje that they “returned after the war to occupy the Drina again”. Such a dehumanizing statement again offended the surviving victims of genocide. According to Milorad Dodik, the Bosniaks, the Podrinje inhabitants are occupiers, the genocide committed against them is positive, and their return is seen as a re-occupation and should be prevented. Thus, he calls for a new genocide in Bosnia and Herzegovina, which is in direct contradiction with Canada’s long-standing efforts for a better future of Bosnia and Herzegovina.

Keeping in mind the above, we invite you to respond with concrete and decisive measures to these serious threats to the peace and stability of Bosnia and Herzegovina, to prohibiting Dodik entry into Canada and sanctioning any of its property in Canada, and putting him and his political party on the blacklist in Canada. We also call on Canada, as a member of the Steering Board of the Peace Implementation Council in Bosnia and Herzegovina, to urge all members to urgently advertise these dangerous nationalist threats.

Professor Emir Ramic
Chairman of the Institute for Research of Genocide, Canada