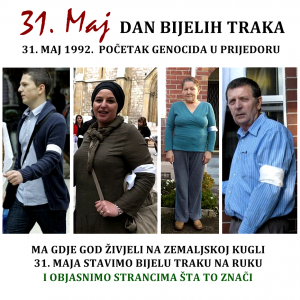 A resolution to declare May 31, 2015, as White Armband Day in the state of Michigan.

Whereas, The horror of the genocide in Bosnia and Herzegovina should never be forgotten; and

Whereas, May 31, 2015, is commemorated as the 23rd anniversary when the Serb authorities in Prijedor, a town in north-western Bosnia and Herzegovina, ordered all non-Serbs to mark their houses with white flags or sheets and to wear a white armband if they left their houses; and

Whereas, As a direct result of ethnic cleansing of the Prijedor municipality in Bosnia and Herzegovina, including the town of Kozarac, 53,000 of its Bosniak residents were expelled from their homes, some 3173 unarmed civilians were executed, and 31,000 civilians were interned in various Serb run concentration camps; and

Whereas, The tragic history of the genocide offers an opportunity to reflect on the responsibilities of individuals, societies, and governments, and serves as an important reminder of what can happen to civilized people when bigotry, hatred, and indifference govern; and

Whereas, The state of Michigan recognizes the importance of this event to bring closure for the Bosnian people through justice and truth; now, therefore, be it

Resolved by the House of Representatives, That the members of this legislative body declare May 31, 2015, as White Armband Day in the state of Michigan. We remember the victims of the policies of ethnic cleansing and genocide in Prijedor, Bosnia and Herzegovina; and be it further

Resolved, That copies of this resolution be transmitted to the representatives of the Congress of North American Bosniaks as evidence of our profound respect and esteem.

B&H became a metaphor for the challenges