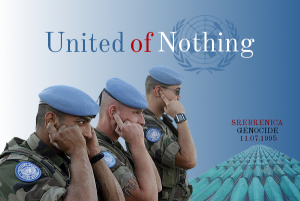 On the occasion of 24 October, The UN Day – UN betrayed B&H

On the UN Day Institute for Research of Genocide, Canada once again reminds the public worldwide that the UN betrayed Bosnia and Herzegovina. Although Bosnia and Herzegovina has been recognised by the UN and the international community as an independent and sovereign state in April 1992 and although Bosnian rebel Serbs and Bosnian rebel Croats had been overtly and covertly supported by the rump Serbia and Croatia respectively, the UN did not term Serbia or Croatia aggressors. The 2{4} of the UN Charter provides “All members shall refrain in their international relations from the breach of territorial integrity or political independence of any state or in any other manner inconsistent with purposes of the UN. Hence if any state uses violence against another state it automatically violates this basic prohibition and is liable to be termed as aggressor. It seems that the UN Security Council did not term Serbia and Croatia an aggressor as it would then have automatically led to the activation of Chapter VII of the UN Charter as in the case of Kuwait whence under Resolution 678 Iraq was branded an aggressor and a multilateral task force could be employed under the Chapter VII of the UN Charter.