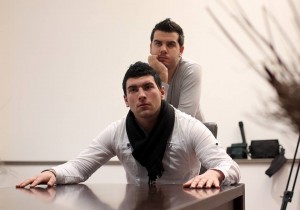 The film “A trap of invisible child”, directed by Semsudin Gegic, follows the life story of Alen Muhic, member of the International Expert Team of the Institute for Research of Genocide, Canada. His mother was a rape victim from Foca and she, after delivering her baby, left him in the war hospital in Gorazde. The movie is a part of project titled “Oral BiH history” which is run by The Institute for Research of Crimes against Humanity and International Law, Sarajevo.

Alen Muhic, abandoned at birth by his Muslim mother who was raped by a Serb soldier during the Bosnian war of the 1990s, went on a quest two decades later to find his biological parents. His painful and dramatic search was captured in a powerful documentary that has made him the first “invisible child”, as those born of rape in wartime Bosnia are called, to publicly reveal his story.

The documentary, which also includes dramatised sequences, deals with Muhic’s “double identity – genetic and adoptive”, its Bosnian director Semsudin Gegic told AFP. “International human rights organisations label children born of wartime rapes ‘invisible’,” he said. “I decided to make a movie in which Alen becomes visible.” Gegic stressed that Muhic was only “one of thousands of children conceived by sexual violence in conflicts throughout the world”.

Muhic’s biological mother fled to the United States after his birth, while his father was first tried and convicted of the rape, but a year later was acquitted of the crime. These days the stocky, green-eyed Muhic, 22, works in the eastern Bosnian town of Gorazde as a nurse in the same hospital where he was born and adopted in 1993. The documentary, which also includes dramatised sequences, deals with Muhic’s “double identity – genetic and adoptive”

Muhic’s mother was living in the village of Miljevina in east Bosnia when she was assaulted by a member of Bosnian Serb forces who had seized the area. She gave birth in February 1993 and refused to even look at the baby boy. By then she and other Muslims had been forced out of their village as part of the Serbs’ “ethnic cleansing” operation. The woman, in her 30s at the time, later fled to the United States, where she got married and is now the mother of two boys, Gegic said.

The mass rape in Bosnia of mostly Muslim women, estimated at over 30,000, further heightened global concerns of rape as a weapon of war or genocide, following the devastating violence against women in Rwanda’s 1994 massacre. Only 61 children have been documented as being born of wartime rape in Bosnia and abandoned, according to research conducted by a local non-governmental organisation, “Women Victims of War”. The true number is believed to be much higher.

The Abduction of Girls i Nigeria is a crime

March 24 marks Day for the Right to the Truth

Request for leave to file amicus in Karadzic