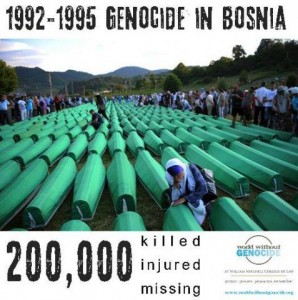 “Denying the Bosnian genocide is unforgivable. Efraim Zuroff should feel ashamed”. Robert Leonard Rope
Robert Leonard Rope is member of the International Expert Team of the Institute for Research of Genocide, Canada. Robert Leonard Rope works as an educator and independent journalist. He’s written several articles on Balkan human rights issues, including “Burning Secrets from the Balkans,” “The Dead Bear Witness,” “The Bookends of Genocide,” and “My Beloved Sarajevo” – all of them published in various news media. He currently resides in California’s Bay Area.

Why Zuroff did not visit death camps and mass graves of the latest genocide victims in Serbia and Bosnia, Bosniaks and Albanians? Azra Duric
Azra Duric is member of the International Expert Team of the Institute for Research of Genocide, Canada

More: Why Zuroff did not visi camps in B&H

The Group of the world’s experts statement