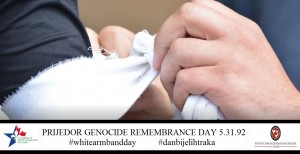 In Prijedor’s concentration death camps of Omarska, Trnopolje and Keraterm were detained 31,000 men and women and more than 53,000 residents of the Municipality of Prijedor were robbed, humiliated and expelled.

All religious, cultural and economic goods of Bosnians and Croats in Municipality of Prijedor were totally destroyed.

In addition to the Bosnians, also Croats were killed, Roms, Albanians, and there were individual murders of Czechs, Ukrainians and Pakistanis.

So far, the Hague Tribunal has delivered at the most verdicts in the Prijedor area for crimes against Bosnian and Croatian population.

Sentence’s of convicted war criminals: Momcilo Krajisnik, Biljana Plavsic, Mico Stanisic and Radoslav Brdjanin clearly confirm the thesis that the political leadership of the Republic of Serbia was complicit in war crimes committed in Prijedor.

The indictment against Radovan Karadzic and Ratko Mladic, the Hague’s Tribunal for crimes in Prijedor, defined as genocide in one of the point’s allegation.

Prijedor was executed and elitocid as a crime of unprecedented proportions in a massive organized and deliberate destruction of Prijedor intellectual elite.

The purpose was to totally exterminate the Bosniak and Croatian elite and intelligentsia, in the name of total destruction of Bosniak and Croatian roots in Prijedor, and these arrangements has been made by the Military Crisis staff of Municipality Prijedor from July 20, 1992.

In such short time in the region of the Balkan, there were not so many respectable and educated people killed as in the area of Prijedor during the aggression on the Republic of BiH.

Ed Vulliamy, a British journalist who was on August 5, 1992, with his colleague Penny Marshall discovered the Prijedor concentration camps, once wrote, ‘Prijedor after Srebrenica, is the most fertile field of death of the Bosnian war.