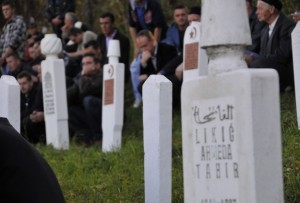 Institute for Research of Genocide, Canada remembers the Stupni Do massacre
The Stupni Do massacre was a massacre committed by Croatian forces on Bosniak civilians during the Croat-Bosniak war in the village of Stupni Do in Vareš municipality. It was committed on 23 October 1993 by Croatian Defence Council (HVO) units called “Apostoli” and “Maturice” led by Ivica Rajić who pleaded guilty before ICTY for war crimes on October 2005. The Croat forces took control of the village and massacred most of the captured people. They raped the women before killing them and looted all houses before setting them on fire. The confirmed number of victims is at least 37.
In Stupni Do, HVO commanders and soldiers forced Bosnian Muslim civilians out of their homes and hiding places, robbed them of their valuables, wilfully killed men, women and children and sexually assaulted women. Twelve villagers were forced into a shed which HVO soldiers then set on fire. The HVO attack on Stupni Do resulted in the deaths of at least thirty-seven Bosnian Muslim men, women, elderly and children (approximately six of whom were combatants). On 23–24 October 1993, most of the village was either wholly or partially destroyed.
In terms of the Bosnian Muslims who died in the attack, at least the following were murdered: Three men and one woman were executed by being shot or having their throats cut; One woman was taken into a house by an HVO soldier where she was executed; Two elderly women, one of whom was an invalid, were found burned inside a house; One man was shot several times at close range after he refused to give an HVO soldier his money; When a group of Bosnian Muslims (one man, nine women and three children) attempted to flee, the man was shot and killed (his half burned body was later found at the same location where he was shot), and two of the women and all three children were murdered in front of their house; Three of the young women who escaped the initial encounter with the HVO soldiers were then found hiding in a small cellar and murdered; Seven members of the same family (two men, three women and two children aged 2 and 3 years old) were found burned inside their shelter; One man, who had been severely wounded in both legs, was carried into a house which was later set on fire by HVO soldiers; (The man’s burned body, together with another burned body, was later found inside the house.) One woman was taken into a room and shot, and the house then set on fire.
Two international witnesses gave evidence of what they found in the village in the aftermath of the attack. The first, Rolf Weckesser, was an ECMM monitor who tried to get to the village on the morning after the attack but found the HVO blocking the road and refusing entry: the soldiers appeared to be drunk and were yelling and said: “We did not like this job, but we had to do it, and we do not like our leaders.” On 27 October 1993 the witness finally succeeded in getting access to Stupni Do with the assistance of the local battalion of UNPROFOR (Nordbat). He found a scene of complete destruction with the houses still smouldering and about 20 bodies burnt beyond recognition, some of them the bodies of children. There were no indications of fighting.
In Vareš town, HVO including members of the Apostoli and military police units, rounded up more than two hundred and fifty Bosnian Muslim men and detained them in the “Ivan Goran Kovačić” and “Vladimir Nazor” schools. During the process of rounding up the above-mentioned men, the HVO commanders and soldiers entered houses and physically and mentally abused the inhabitants and persons present and robbed them of their valuables. Detained Bosnian Muslim men were beaten and abused by HVO soldiers. During the time from approximately 23 October to 3 November 1993, in Vareš town, HVO commanders and soldiers under Ivica Rajić’s command and control looted and appropriated Muslim property, robbed Muslims of their valuables and sexually assaulted Muslim women.