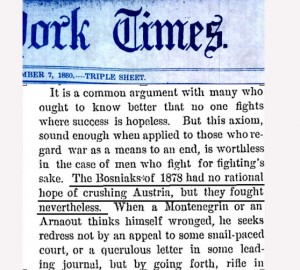 The issue of Bosniak identity is the issue of Bosniak and Bosnia and Herzegovina survival
New York Times article from 1880 which briefly talks about Bosniak resistance to Austria-Hungarian occupation is example that the Bosniak national name was widely recognized before it was forcefully disallowed by Austria-Hungary and Yugoslavia.
The best proof of traditional tolerance among Bosniaks is found in the incredible story of eleven distinguished inhabitants of Sarajevo of Jewish faith, who were imprisoned by Ruždi-pasha, a new Vizier (governor) of Bosnia, appointed by the Sultan in 1820. The Pasha asked for a huge ransom and threatened to decapitate the Jews unless the money was paid by a certain date. The ransom amount was so high that it could not possibly be paid by the Jewish community of Sarajevo, so one of their leaders appealed to the Bosniaks of Sarajevo for help. The following day over 3000 Bosniaks went to the Pasha’s palace and, risking their lives, requested that the Pasha release the Jewish captives, which he did. This story was first told in the book The Sefardim of Bosnia, published in Sarajevo in 1962 and written by the chief rabbi of Sarajevo Moric Levi (later also published in Jevrejski glasnik (The Jewish Herald), a monthly publication of the Jewish community of Sarajevo). This episode took place at a time when anti-Semitism was rampant in Europe and when Jewish people around the world were deprived of basic human rights.