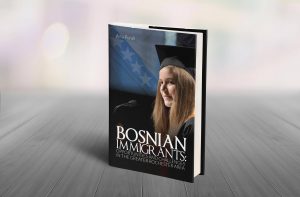 The work titled “History of Bosnian Immigrants in the Greater Rochester Area” by Aiša Purak has been the result of a long-term theoretical and empirical study, in which the subject being very complex and constantly evolving. Ten social phenomena are the subjects of study, connected, conditioned, and interdependent: Refugees from Srebrenica and Concentration Camps, Rape as an Act of Genocide in Bosnia and Herzegovina from1992-1995, History of Bosnia and Herzegovina, Who are Bosniaks, Roots of Bosnian Immigrants in America, Generational Gap among Bosnian Im- migrants, Bosnian Refugees in America-Background, Bosnian Refugees in Rochester NY, History of Bosnian Organization in Rochester, NY, Culture and Religious Identity of Bosnian Refugees in Rochester, NY.
This research study has utilized all relevant, valid, and reliable sources of data. Gathered information are sufficient, valid, and reliable for defining qualitative determinants and features of phenomena and their mutual relations, including quantitative dimensions, their distribution, and duration. By linking data from the original social research with the findings from the existing pool Purak, set up logical conclusions meaningfully drawn from her findings. The book aims to establish Bosniaks as a natural part of American society. The book goes into psychological precepts of identity development and it does an excellent job illustrating that “identity” is never a homogeneous, one dimensional entity; it is a complex tapestry of background, experience, and individual differences. The book focuses on integration models and presents the way Bosniaks are an integral part of American society. Reading the book gives you a greater appreciation of the blessing of American society and the ease with which groups of all faiths and backgrounds maintain their
culture and ancestral identity and simultaneously take on a new identity as Americans. Scientific results, presented in this research paper, represent the pertinent and relevant contribution to the development of scientific findings in the area of social and humanist sciences.
Aiša Purak had the misfortune of sharing this destiny with me and with many others now American citizens, who fled to the USA to escape ethnic cleansing during the 1992-1995 aggression on Bosnia and Herzegovina. Aiša Purak is an exceptional example among the many survivors because she re- fused to surrender to the challenges that come with that life experience and instead opted to continue pursuing her education in the USA and making various contributions for the betterment of the larger society. Her intellec- tual contributions on public policy issues concerning vulnerable population groups in the USA are a source of pride in our community. Her public policy advising on issues related to public administration in the USA played an integral part in our long campaign to have the USA join the international community in formally recognizing the genocide that occurred in Bosnia and Herzegovina and establishing July 11 as a Srebrenica Remembrance Day, to honor the victims of Srebrenica massacre.
Aiša Purak now serves as a valuable International Expert Team Council Member with our Institute for Research of Genocide where we work on rais- ing awareness about the tragic events that took place, primarily, but not exclu- sively, in Bosnia and Herzegovina, which involved gross violations of human rights and unresolved war crimes carried out in Bosnia and Herzegovina from 1992 to 1995.

“Holocaust in Bosnia and Herzegovina”