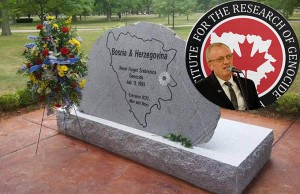 Statement on the occasion of opening the monument to the victims of the Srebrenica genocide, Windsor

Ladies, and gentlemen, dear genocide victims, dear friends, I have been honored and it is my pleasure to address you, as a witness to the events in the Republic of Bosnia and Herzegovina at the end of the 20th century, a scholar and a genocide victim, on this occasion of opening the monument to the victims – today in Windsor, and to present my opinion, my views, and a message.

It has been a generally accepted fact that at the end of the 20th century in the heart of Europe, Serbia and Montenegro and their authorities – pseudo-state creation Republika Srpska committed in a small Balkan state – the Republic of Bosnia and Herzegovina, the crime of genocide against Bosniacs, members of a national, ethnic, and religious group as such. This crime of genocide, by its extent, intensity, intentions, modus operandi, objectives, and consequences, was particularly noticeable in Srebrenica, the UN Safe Area in July 1995, when the Serbian aggressor (Federal Republic of Yugoslavia – Serbia and Montenegro) along with their (Serb) collaborators and fifth-column from the Republic of Bosnia and Herzegovina and the accomplices from the dominant part of the international community, in and around UN Safe Area Srebrenica, during only one week in July 1995, captured, killed and buried in mass graves thousands of Bosniacs; buried alive hundreds of them; mutilated and slaughtered men, women, and boys; killed children before their mothers; forced a grandfather to eat the liver of his grandson; raped women and girls; expelled around 30,000 people, mainly women and children, presented the scenes from the Dante’s Hell. There are ample pieces of evidence attesting to these “scenes of unimaginable savagery”, including mass graves – primary, secondary, and tertiary. According to the ICTY, these are “indeed the scenes from hell, written on the darkest pages of human civilization”.

Scientific findings acquired in course of research of genocide and other forms of crimes against humanity and international law, serving the function of development of the science of genocide and appropriate education at all levels of education, from the primary schools, then secondary schools, including the university level education, on the basis of which this specific social phenomenon has to be studied and scientifically researched, both for the scientific and social reasons. Education in the process of teaching is an essential component of socialization, in which certain knowledge, values, norms, customs, and cultures are acquired, all serving the function of memory and permanent remembrance. This is a permanent obligation of the present generations towards all the victims of the Holocaust and genocide, including the victims of the Srebrenica genocide.

It is the obligation of all of us to detect and identify the human, social, and scientific truth about genocide and other forms of crimes against humanity and international law, being an important condition for achieving the justice and rights, without which it is not possible to get the reconciliation and build the common future in Bosnia and Herzegovina and of the state of Bosnia and Herzegovina, being the prototype model of the development of contemporary civilization and culture in Europe and the rest of the world.

I would like to thank all the activists of the Bosnia and Herzegovina Club Windsor for their continuous support in lobbying for the truth and justice. I would like to express my particular gratitude to the organizers of building this monument to the Srebrenica genocide victims.

Emir Ramic
Chairman of the Institute for Research of Genocide, Canmada

Protest letter to the MCFC Chairman

Similarities between Ukraine and Bosnia