Legal basis was neglected in case of the Dayton 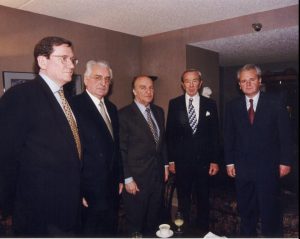 From the position of international humanitarian law, the Dayton Agreement should have never been adopted and signed

In this context of 22. years of Dayton Peace Agreement it is important to point to the setting up of a pseudostate (illegitimate) creation Republika Srpska. In 1991 and in line with the Serbian great-state project “all Serbs in one state”, illegal Serbian authorities as well as territorial units were formed in the territory of the Republic of Bosnia and Herzegovina, followed by inauguration of the illegal “Assembly of Serbian People in BiH”, which, up to the adoption of the Dayton Constitution, passed on decisions of fascist and genocidal nature by way of which nationalist great-Serbian related ideas were shaped up into norms and standards. Thus, the pseudo-state unitary creation Republika Srpska was established in constitutional terms favoring sovereignty of one nation only. The rule of Serbian people was legitimized in Bosnia and Herzegovina and a legal framework for the national state of Serbs was created, in line with great-Serbia ideology and politics “all Serbs in one state”. Practically, everything not related to Serbs was destroyed while a Serb pseudo-state creation was set up. The Federal Republic of Yugoslavia (Serbia and Montenegro) formed the so-called Serb Republic of Bosnia and Herzegovina on 9 January 1992, to be renamed into “Republika Srpska” on 12 August same year. By way of the Dayton Peace Agreement, western powers awarded and endorsed “nationalist and territorial politics, which perpetually, even in post war time reproduced malign conflicts over ethnic territories”, and recognized Serbian territorial conquest (“legitimacy of war ideologies and politics”), having given away to “butchers a land covered in mass graves”, institutionalized genocide and legalized the existence of the entity Republika Srpska. In this way an illegal regime de facto was transformed into a legal element of the constitutional “state” known as “Republika Srpska”. It concerns a legal successor of a fascist regime, under which the most severe forms of crimes against humanity and international law were committed, including genocide against Bosniacs. In this way the General Framework Agreement for Peace in Bosnia and Herzegovina (Dayton Agreement), i.e. Annex 4 thereto, representing the Bosnia and Herzegovina Constitution, and in addition to numerous deficiencies, became an agreement in contradiction to itself, because the basic endorsed principles, inter alia, are territorial integrity, protection of human rights and freedoms, prevention of genocide and other forms of crimes against humanity and international law. One has to pose a question how is it possible that the Dayton Peace Agreement prohibits genocide and other forms of crimes against humanity and international law, when at the same time that agreement legalized a pseudo-state creation Republika Srpska established on the grounds of an aggressor’s war and crimes of genocide? The Republic of Bosnia and Herzegovina and its territorial integrity were abolished by the adoption and ratification of the Dayton Peace Agreement. Unfortunately, by way of the Dayton Peace Agreement, the victim of aggression and genocide victim endorsed division of the Republic of Bosnia and Herzegovina and legalized and actually legitimized results of crime against peace and crime of genocide. Naturally, this could not have been achieved in a legal fashion, which distinguishes criminals from genocide victims, but in the sphere of agreement – in which automatically the criminals and genocide victims were legally equalized, and whereby the genocide victim having consented to the agreement, actually exonerated criminals. From the position of international humanitarian law, the Dayton Agreement should have never been adopted and signed. “Due to lack of international-legal subjectivity of one of contracting parties” and “grounded suspicion that the principle of willingness of negotiation 2289 was violated”, the General Framework Agreement “cannot be deemed legally valid not its validity may be compensated by the passage of time.” The Vienna Convention, regulating international treaties in legal terms (such as the Dayton Agreement) excludes a possibility that aspects of sovereignty can be the subject of inter-state treaties (Article 46); treaties procured under the coercion are deemed not to have a legal effect (Articles 51 and 52), and even such treaties which appear seemingly procured of free will as a result of illegitimate will of negotiators who negotiated over issues for which they were not competent for under their own constitution (Article 49). Evidently the legal basis was neglected in case of the Dayton Agreement, because it concerns a political agreement, which departs from legal in favor of a negotiable approach.