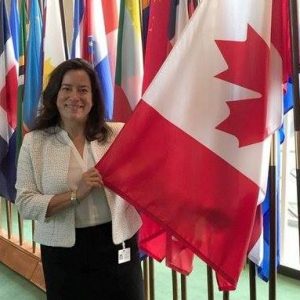 Milan Lesic took tens of thousands of Canadian dollars to finance the aggression and genocide in the Republika Srpska entity. In return, Karadzic give him a pistol, and Mladic fiddle for his support. The depth of their friendship is testified by the fact that he saw Karadzic and Mladic in 2001 for the last time in Belgrade, where both were hiding from international justice. This support obviously did not stop even after the aggression and genocide on Bosnia and Herzegovina, since he maintained contacts with Karadzic while he was a fugitive from international justice. Namely, in 2001 Lešić met separately with Karadžić and Mladić in Belgrade. Within a year after Karadzic’s arrest, at the beginning of 2009, the niece of Momcilo Krajisnik, joined Milan Lasic in the church in Canada where she was seeking money to help Karadzic.

Based on the fact that Canada has adopted a federal law on “Universal Jurisdiction” for crimes against humanity, on the basis of which a citizen of Rwanda in 2009 was sentenced to life imprisonment for participating in the genocide committed in that country in 1994, the International Expert Team of the Institute for Research of Genocide, Canada which has more than a hundred eminent genocide researchers and human rights activists in collaboration with the Congress of North American Bosniaks, many organizations for the protection of human rights and freedoms in the world, and in cooperation with organizations of survivors of genocide in Bosnia and Herzegovina asks you to pay special attention to the allegations we receive concerning the criminal activities of Canadian Serb Milan Lešić.

It is in the interests of justice and truth, therefore, a better common Bosnian-Herzegovinian future for all war criminals living in Canada to be prosecute.

We look forward to Canada response.

Attached are links where you can see Milan Lešić’s criminal activities.

1. The young man in the presence of Milan Lešić baptized is a captured Bosniak in Trnovo in 1994
https://www.youtube.com/edit?o=U&video_id=0w07r8VnHvY

2. Milan Lešić gives a donation to finance the war for the genocide for Radovan Karadžić and war crimes indictee Momčilo Krajišnik in Pale in 1994.
https://www.youtube.com/edit?o=U&video_id=dwaEonc5n5g

3. Milan Lešić gives a donation to the Accused for the genocide of Ratko Mladić in the command of the Main Staff of the Republika Srpska Army at Han Pijesak 1994
https://www.youtube.com/edit?o=U&video_id=rhxwWqmCdgc

4. Milan Lešić with genocide indictee Ratko Mladić visits a line of attacks on the UN protected Zepa zone in 1994.
https://www.youtube.com/edit?o=U&video

5. Milan Lesic and Ratko Mladic at the Military Hospital in Belgrade
https://www.youtube.com/watch?v=CN7X0bjz21w

Boyle’s statement of the intention